Tennis elbow and golfer’s elbow, correctly termed epicondylitis, is a common disorder that results in a great degree of pain and impairment.  It refers to inflammation at the two bony protrusions, or epiconyles of the elbow, and occurs on either the inside or outside of the elbow.  If not identified and treated early, it can lead to a chronic condition which can take weeks to months to heal. 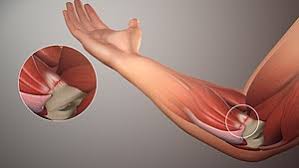 Medically known as lateral epicondylitis, it was first coined ‘lawn tennis elbow’ in 1873 due to its prevalence in tennis.  It occurs due to overuse of the wrist extensors, which are the muscles on the outside of the forearm that attach to the elbow.

Even though it is estimated that 50% of those who play tennis will at some point in their lives experience tennis elbow, interestingly, less than 10% of individuals with tennis elbow are actually tennis players (Tosti et al., 2013).

Medically known as medial epicondylitis, Golfer’s elbow refers to overuse of the wrist flexors that attach to the

elbow.  These are the muscles on the inside of the forearm.  Golfer’s elbow is less common than Tennis elbow.  It can occur in racquet sports activities such as tennis and sports that involve the act of throwing (Prentice, 2011).

The unique anatomy of the elbow and the movement that it permits places a complex set of forces on the elbow joint.  Repetitive bending/twisting movements of the wrist and elbow or activities that involve high handgrip forces, an accumulation of stress to the inside and outside of the elbow occurs leads to inflammation and, with time, can lead to degeneration if the tendon fails to heal.

Although prevalent in sports settings, the normal hustle-and-bustle of life can also lead to tennis or golfer’s elbow.  For example, jobs that involve handling heavy loads, gripping tools with high vibrating forces such as the jack-hammer in construction, or work that involves using ones’ hands repetitively for long periods of time, such as typing at a computer, can lead to inflammation at the elbow (Shiri et al., 2006).

WHEN TO CONSULT A HEALTH PROFESSIONSL?

Consult a health professional if you experience any of the following:

A Biokineticist will help you diagnose the injury, rehabilitate the damaged tendon and advise and educate you accordingly.  In most cases, following initial injury, it will be necessary to see a Physiotherapist who will treat the inflammation and initial symptoms.  Thereafter, a Biokineticist will carefully strengthen the damaged tendon, treat the cause of injury and restore elbow function to facilitate return to work or sport, pain free.  This type of treatment forms part of conservative/non-operative treatment and is preferred over an operation, which in most cases is the last resort.

The danger of any tendon injury is a lengthy and sometimes failed healing process. So, consult a health professional if you experience any of the above symptoms and in so doing promote a speedy recovery.